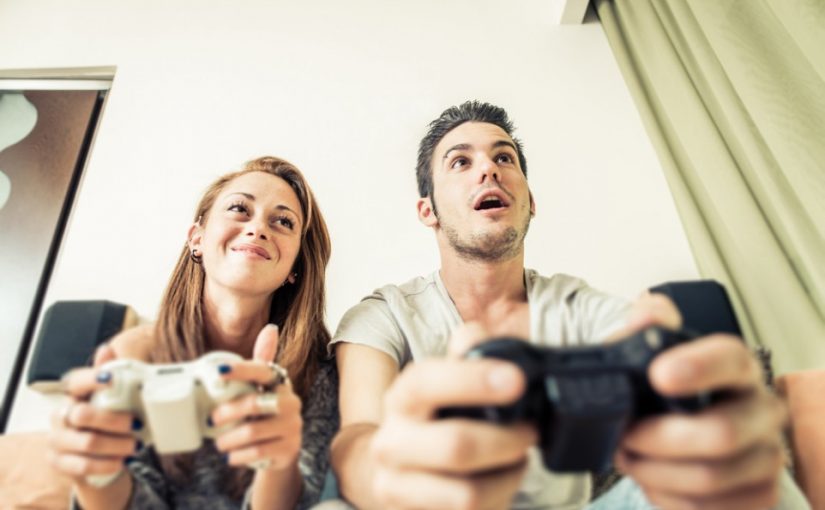 We all remember the days when video games started to become popular in households all over the world. It all began with very rustic looking games in the 70’s and then things started to evolve in the 80’s and 90’s, but it wasn’t until the early 2k’s that the video game industry started to make games that had adult content. When this happened, it was very clear that video games were no longer for children. Now video games have all kinds of genres and have labels that rate them depending on their content.

The reason why we are mentioning this is quite simple. Video games have turned into an extremely popular activity for adults. There are games about war, games about fantasy and Sci-Fi and games about sport to name a few. There are horror games, action games, role playing games and fighting games. All of them are quite different but they also have one thing in common. They are all great to help people get rid of stress.

In this article, we are going to be talking about how games play such an important role in helping us get rid of stress in life, but we also caution people on the misleading idea that this is the best way to get rid of stress.

The gaming community used to be predominantly male, but the number of female players is growing quite fast with 45% being female and 55% being male. The predominant age groups that play video games frequently is definitely one that surprises most people. Kids under 18 years old are about 32% of the gaming demographic. Then you have people between 18 and 35 years of age and they take another 32% of the community. The largest demographic is made up of people who are 36 to 60 years old with a slight advantage of 36%, but it’s quite clear that everyone seems to benefit from gaming at any age.

There are many reasons why video games are great for stress relief. The first one is that people are able to enter entirely new worlds, and they can escape the reality of their daily activities for a few hours. The simple act of doing something that takes your mind off your problems at work or your problems with your friends, family, and spouse, is more than enough to help people get rid of stress. There are many incredible worlds to explore in video games. This s the reason why it can be such an appealing hobby and why so many adults seem to be finding a great way to escape from the real world in the comfort of their living rooms.

There was a time when violence was something very mild in video games. That was until old games like Mortal Kombat started to bring graphic and brutal fights into the world of video games. Soon after, other companies started to see that they could get away with making violent games, but this gave birth to the rating system that all video games use in modern times.

Now we have games like Grand Theft Auto that allow you to play the role of a criminal. There are many games like this now and they all showcase a very strong level of violence that could seem damaging instead of helpful, but studies conducted in 2010 showed that gamer who engaged in violent video games seemed to be able to remain calm and avoid setting angry or stressed in real life situations.

It seems like being able to shoot people and monster in video games is a positive way to blow off some steam. Gamer use this kind of content as a cathartic method to get rid of their tension and anxiety. Games like Call of Duty have become massively popular because they allow people to go online and start shooting each other with handguns, rifles and rocket launchers.

Other studies have been conducted on the overall performance of workers depending on the kind of activities they like to engage. It seems like people who like to play video games report, feeling more relaxed after a long week of hard work.

We all know that too much of anything can be a bad thing. Video games are not meant to be played all day long. That is unless you are a professional video game player, but in that case, games are stressful to you, because your livelihood depends on them but for the average gamer, this is meant to be for fun and stress relief. This means that dedicating a couple of hours a day to gaming on average is the recommended quota.

When people spend all of their free time playing video games, it becomes another stressful addiction, and it loses the stress-relieving power that made it such a practical way to get rid of tension and anxiety.

It’s one thing to play video games alone and it’s a completely different thing to play video games online. Most studies, surveys and general research have concluded that gaming is great to help you get rid of stress, but only when you play single player games. The levels of stress seem to be higher when people are competing against others on the internet. This phenomenon takes place because people reconnect themselves with the real world when they know other people are involved.

Puzzle games and single player games with very little commitment are the best kind of games to play to get good results as far as stress reduction. With that said, it also depends on the kind of game being played and on how much the person is emotionally invested in the game. These are factors to take into consideration, but the main point to remember is that there are always two side to every coin and there is a downside to using video games a stress relief.

The Problem with Video Games

The biggest issue with video games is that using them as a way to get rid of stress is only a temporary solution. Not only that, but it’s also a very sedentary solution. Outdoors exercise and activities that involve artistic expression are much better options than video games.

It seems like many individuals are using video games as the only stress relief in their lives and this is definitely not a healthy way to go about stress relief. You need balance in life and this means that physical activities need to be just as frequent in your life as video games.

There is no way to deny that video games have started to play a very important and useful role in modern society. They help people relax and wind down after a hard day of work and they even help keep them from engaging in activities that might not be good for them. The important thing is to remember that balance is extremely important with everything that we decide to do in life.